Amidst the numerous changes that occurred during the final Season of Millennium fans were introduced to Assistant Director Andy McClaren, a old friend of Frank Black and his peer in the FBI to which he returned after the death of Catherine. BTFB were delighted when actor and author, Stephen E. Miller took time from his busy schedule to talk to us and to extend his support to our campaign.

BACKTOFRANKBLACK.COM: Thank you, Stephen, for agreeing to speak to us. May I begin this interview by discussing your introduction to the show? When a new character is introduced to a franchise as established as Millennium was at the time you joined the cast, are former story arcs and the show’s mythology explained or do most actors merely concentrate on their role?

STEPHEN E. MILLER: In general, most actors first priority is to get their part right, but with a show like Millennium, where the plots are so complex and you don’t know who is betraying who, it really helps to know as much as you can. I had some depth of experience with Chris and had actually be hired as a recurring character when they did the pilot, but for reasons unknown, our little group of characters – Frank Black’s former Seattle P.D. Homicide team – were dropped from the show. I didn’t think I’d get back on at all, so when I came back as Andy I was really happy. As far as trying to understand the story lines there were many times when everybody was trying to figure things out. You come in, sometimes, for just a little piece of the story, and you really have to trust the director. I did a lot of my episodes with Thomas J. Wright and he was really honest and really good.

BTFB: As many of Season Three’s new characters shared a large portion of their screen time with each other, does this make assimilation into an established cast easier knowing that others are in the same boat as yourself?

SM: Well – there was a gulf between what was happening on set and all the behind the scenes stuff. I didn’t think for an instant that the show was going to get cancelled before the Millennium, for instance. As far as getting along with everyone, they were all pros and have been around the block a lot of times and it was easy.

BTFB: There remains, from a fans perspective, confusion as to when the series’ cancellation was made known to the cast and crew. At the conclusion of Season Three were there still high expectations that a fourth season would be commissioned?

SM: Well, some people may have known more than others, and there are always rumours, particularly if you think your show is going to fold. The crew are always talking about it, and thinking about their next job and you pick up things, but I think we found out for sure sometime in the new year, maybe around February sometime. They were always saying maybe we’d come back; the final decision, the absolute cut off and point of no return might have been made in hiatus after we were finished shooting season 3.

BTFB: The relationship that developed between Andy and Frank was a joy to watch, was it as enjoyable to develop this relationship on screen and how do you recall your time working alongside Lance Henriksen?

SM: Oh, I love Lance. He’s an absolute joy to be with. He had to work very hard on that show, lots of nights and lots of foul weather and he took it really well. He often said “the only reward for good work, is more work” when they’d call us to set. He’s a very funny, very engaging guy. Tough but not temperamental. Salt of the earth, I really admire him.

BTFB: The recent X-Files movie brought yourself and Sarah Jane Redmond back into a 1013 production, was it a pleasure to work along side her again after Millennium and Da Vinci and did talk turn to the possibility of a Millennium Movie?

SM: I think we did the X-Files movie at different times and I didn’t see her and didn’t know she was in it until I saw it on the airplane. I missed the cast and crew screening in Vancouver because I have been flying back and forth to North Carolina to spend time with my mother this year, so the next time I see her I will tell her. There has always been talk of a Millennium movie and I think it would be great. I hope I am around and in it, if Chris can get it together. It was great to be in the X-Files movie and see everybody again. I like David and Callum is an old friend. They put me up at this incredibly swank hotel in Whistler, but we were working long days and nights mostly and so I only got to sleep there during the day, only got to sample the restaurant once, and it was a good one too. Saw Billy Connolly in the coffee bar in the morning and didn’t bother him, but I’m a big fan of his too. We shot some more feed store operator scenes, a piece where I’m driving late that night in a blizzard on this unbelieveably snowy road and see that somebody has gone through the guard rail. Down below David is crawling out of his car and yelling for help and I can’t hear him. Then he has to walk out to safety. It was a real blizzard and a very steep road, hard to drive. A little edgy and lots of fun to do.

BTFB: Fans of Millennium are aware of your work as a writer, comparatively, which brings you the most personal satisfaction. I am aware that you have combined both your talents and written for Da Vanci’s Inquest, is writing for teevee something you would like to do more of?

SM: I’d love to do more t.v. and screen writing. The money is extremely civilized for starters, and it’s a much shorter thing to do than research, plot, and write historical fiction, I can tell you that much. I was so happy to be working with Chris Haddock on the DaVinci’s shows. That was one of the very best experiences of my professional life, and I’d fly back to Haddock anytime for anything. I’ve been very lucky to work with some great, creative guys, Chris and Chris…

I love acting, and the theatre, the whole process of film making. I’ve done a lot of little jobs in little independents and productions that have hardly ever seen the light of day. I’m a character actor so I just drop in for a few days, do my thing and then escape. But I have done a lot of collaborative work, particularly when I was just starting out, and that’s my favourite. I’d like very much to be part of a writing team, for example.

I’ve been very fortunate that my career as a novelist seems to be taking off. I just yesterday finished the first draft of my next book and sent it off to my agent, so…it keeps me busy and takes care of the bills. Unlike acting, a writer is (for a spell of time) in total control of what he does, so it’s therapeutic.

BTFB: What should fans keep our eyes and ears open for in relation to the continuing career of Stephen E. Miller?

SM: I’ve just finished doing a little independent feature up here called “Cole” its directed by Carl Bessai and is just a really nice piece of work. I’d ask the fans to check out the books, of course. They can find out all about it at stephenmillerwriter.com

BTFB: Once again, than you from all your fans in the Millennium Community. We wish you continued success and happiness for the future!

SM: Thank you for caring about the show, and for your interest. My best to everyone. 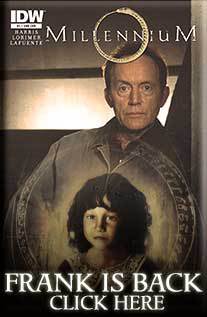